Hello and welcome to a special Western Isles Weather Blog post covering the July 28th, 2009 Tornado which happened on this date 10 years ago. We are going to look back at this tornado event. My own memories of that night. Photos and reports from newspaper articles, locals and more. 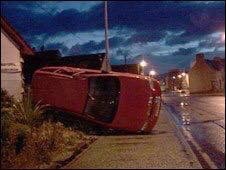 The UK gets on average around 30 to 50 tornadoes a year. That number differs depending on the source of information.  It is not a high frequency. The number could be higher if they occur in open land and go unreported. For it to be a tornado the funnel has to touch the ground. There are many reports of funnel clouds across the UK and these are not tornadoes as they do not touch the ground.

The tornado came ashore at the Stornoway Sea Angling club during some strong thunderstorms. The tornado wrote off my friend’s car which is pictured in the image above. A few of my friends were in the Sea Angling club at the time and reported having to take shelter as some of the windows got blown in due to the strong winds associated with the tornado.  A small boat was sunk on its mooring at Goat Island.

I was still working for the co-op at the time up on Macaulay road the shop back then shut at 22:00.  I was outside tidying up and getting everything secured for the night. I knew something was happening with the weather because I felt the heat like you never feel in this country. It was more akin to what you feel when you get off the plane when you are going on holiday abroad.

I recall a big boom of thunder and it felt like the whole building shook. I remember driving home after the shift along Matheson road and being totally unaware of what had been happening. This was in the very early days of social media and smartphones and it was a very long way off from getting 2G never mind 4G so there was very limited information other than a storm had occurred. It was some 3 years before Western Isles Weather was born and I didn’t find out the true extent of that night’s events till the next day. Now my weather page would light up like a Christmas tree with people reporting what had happened.

The above image from the Meteo Group shows the Thunderstorms across Lewis and Harris with the most powerful part of the Storm over Stornoway.

A campervan near Tesco’s at the time was rocked with one of the youngsters in the van being thrown out of bed. Thankfully the tornado did not cause any injuries. A power cut impacted the entire town of Stornoway for 1 hour.

The tornado thankfully missed the fuel depot and moved along the outskirts of town it blew down a chimney stacks and ripped tiles off roofs. Slates were thrown off roofs.

Other cars were damaged on Garden Road and Trees were blown down on Goat Hill road. Windows were reported to have been blown in on Columbia place. Some reports suggest that the tornado dissipated along Sand Street after doing damage on Percival Road. However, some accounts report it crossing Broad bay and doing damage in Tong with roof damage and blowing away trampolines.

Jennifer Ross was working for the Police in Stornoway that night and was first on scene at the sea angling club and described damage to cars parked along the road as well as campervan which had been blown over.  She also recalls a trampoline that had landed from Goat Hill road. Alasdair Martin reported to us that a tree was totally destroyed at Stornoway Primary School image included below.

Wind speeds in this tornado have been estimated in the region of 80 to 120 mph based on the damage done. I think there was a local damage survey done but I have been unable to find any information about that. Below is a rough track of the tornado shared to us by Guido Blockland. 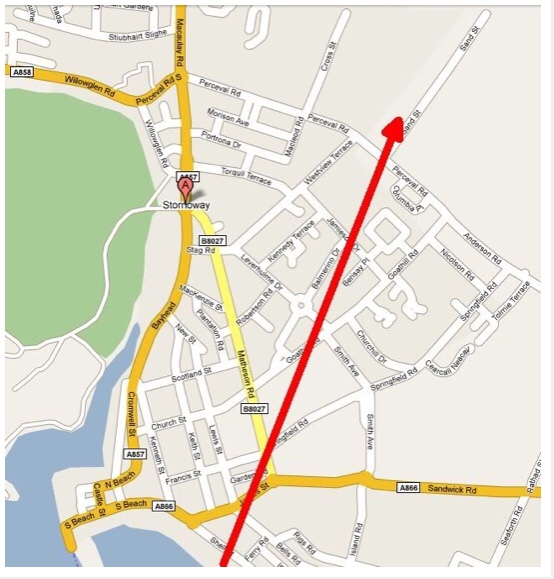 If you have any reports stories, photos or memories of this event please share them with us. Thank you.